Posted on April 8, 2012 by Christy Stevens
Any of you following along may already know that I have several “nightmare scenarios”, or what Natalie Dee calls “Intrusive Thoughts”. 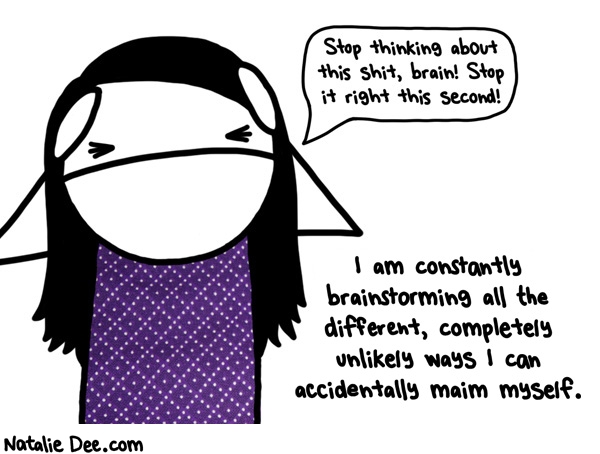 Today, I achieved one of those scenarios.

I was hooking up my XBox360 and had set it up in a wooden shelf. I was working quickly and didn’t realize there was a rough spot on the front edge of the shelf. I made a quick motion with my hand and jammed a wooden splinter up under my fingernail, halfway to the quick.

I immediately screamed and recoiled. Holy craps, it hurt SO BADLY. My 4-year-old was sitting on the bed, watching me, saying “Mama, what’s wrong? What happened?” as I rolled on the floor. I jumped up and ran for the bathroom, flung the light on and took a quick look to see how much blood there was.

No blood. WTF? But there was a splinter sticking out of my fingernailOHMYGODTHEHORROR!

In a panic, without another thought, I grabbed it and yanked it out.

However, I think I did the right thing. There was no way in HELL it was going to stay jammed up under there, develop an infection and then require my finger to be amputated. NO WAY.

It left a tiny light-colored trail of space under my nail. That was 4 hours ago and now the trail is gone, though my finger still hurts like a mofo. (Typing kind of sucks.) Also, I can’t stop imagining it over and over. ALSO I’m half afraid to even walk quickly for fear of initiating a landslide of subsequent nightmare scenarios, resulting in a trip to the emergency room.